The American Standard Champion 4 is a one-piece toilet that is designed with a right height feature. It features an elongated bowl for the superior comfort of the users by providing more legroom. Additionally, the flushing system of this toilet consumes only 1.6 gallons per flush water and delivers a strong and powerful flushing performance. 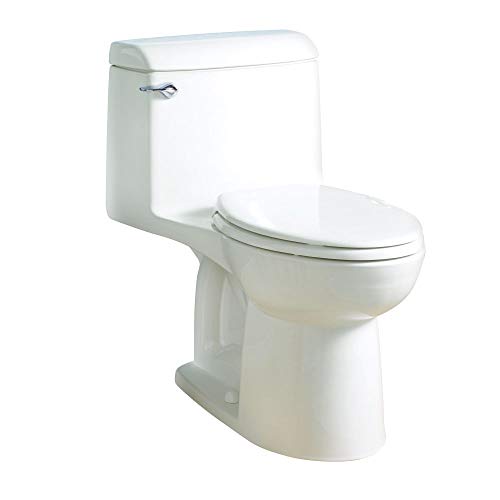 This toilet features a broad, fully-glazed trap-way that removes about 70% more waste than a standard toilet in one go. In addition to that, it comes with an EverClean surface. This surface keeps it clean for a longer time, by preventing the growth of odor-causing bacteria, mold, and mildew on the surface.

Let’s have a further look at the American Standard Champion 4 review.

This single-piece toilet is made from vitreous china and features glazed surface to keep the toilet bacteria-free. This fantastic antimicrobial finishing layer inhibits the growth of microorganisms, such as odor-causing bacteria, mold, and mildew, and it keeps your toilet’s surface stainless.

Additionally, the Champion 4 is ADA certified. 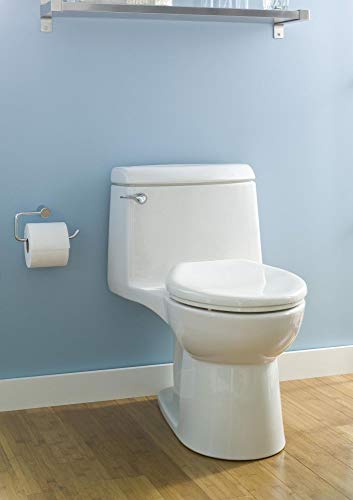 The powerful flush system of Champion 4 consumes 1.6 gallons of water per flush and uses siphon action inside the bowl to boost the flushing efficiency. Additionally, its large and fully-glazed trap way ensures the best flushing performance by moving 70% more mass of the waste compared to traditional toilets.

When this flushing system combines with its EverClean surface, it guarantees a bacteria- and odor-free toilet. A chrome trip lever mounted on the tank provides convenient and effortless flushing operation.

Champion 4 uses a high-pressure and powerful flush system. When you combine it with the EverClean surface, it cleans the bowl each time you flush the toilet and inhibits the growth of microorganisms, such as mold, mildew, and odor-causing bacteria. The siphon action bowl increases the efficiency of each flush.

Like the American Standard Cadet 3, this one also requires a standard 12-inch rough-in for its installation. Since the Champion 4 is a one-piece toilet it is heavier than two-piece toilets which is why you will need an extra pair of hands for its installation. Other than that, the setup procedure is pretty straightforward and quick. Additionally, Champion 4 features a Speed Connect tank/bowl coupling system that makes the positioning of the tank on the bowl very convenient and effortless.

The Champion 4 toilet has a very powerful flush. However, it uses 1.6 gallons of water per flush, so it’s not WaterSense certified. Also, it might slightly increase monthly bills for water in the long run.

We mentioned that 1.6 GPF rate doesn’t qualify for EPA WaterSense standards. However, it’s still much better than most regular toilets. For example, some older models consume up to 5 gallons per single flush. 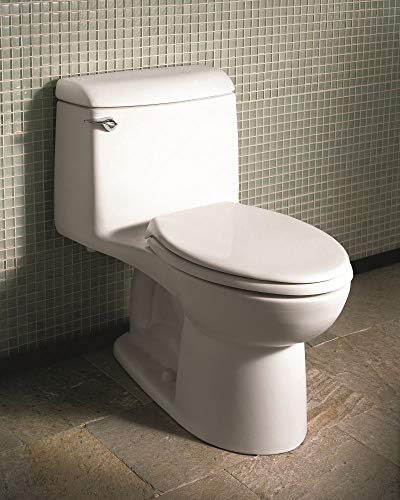 EverClean is a special surface that prevents contaminants and bacteria from sticking. It’s very smooth, allowing the waste to pass quicker and prevent it from sticking. Plus, it directly reduces the time for manual maintenance.

Vitreous china is a strong and durable material that most quality toilets are made out of. It’s been tested many times, and is proven to last at least 10 years. It’s an excellent investment for your bathroom since buying a toilet is not something you do every day.

You might have noticed that most toilets come with a 1-year warranty. Some units don’t even have a warranty. However, with this American Standard toilet, you will get a 10 year warranty. You won’t have to worry about replacement of damaged or broken parts.

Champion 4 toilet is not the best choice if you are looking for affordable, two-piece units. It has some features that affect its price, such as an effective and powerful flush. Also, its oval bowl increases the overall comfort, and the product also has a standard height, which add to the price.

Like any other product, the Champion 4 has some common problems that we should mention. First, if you make the flush valve too tight, it might cause leaking. Also, the toilet might clog sometimes, which would affect the flush power and waste water. Finally, the tank sometimes takes too long to refill. It usually happens when the shut-off valve is halfway closed. Most of the time, you can just turn the valve to prevent the slow refill. 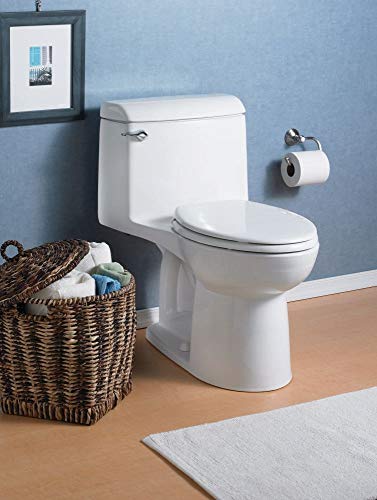 How Do I Install this Toilet?

You should start the installation by installing the bolts in the flange. Then, install the wax ring and add a sealant around the base. Place the toilet in the right position and make sure that the bolts enter the right holes. Then, using nuts and washers, ensure that the toilet is not too tight. Finally, press it down on the flange, and connect the water supply.

Yes. Since the toilet seat has a standard size, most third-party seats will fit properly.

Are the Wax Ring and Floor Bolts Included with Champion 4?

Many people think that a newer version should always be better. However, that’s not true. After comparing, we can conclude that there is absolutely no difference between this and the new model. No added features and no improvements.

First, Champion 4 has an EverClean surface, which keeps the bowl clean all the time. It also prevents bacteria and contaminants from sticking. Next, it’s constructed with a strong material that can last up to 10 years. It also has a powerful flush system, and is comfortable and easy to get up from for most people. Of course, since it’s a single-piece unit, you won’t have to do frequent maintenance. It will clean itself during every flush.

This one-piece toilet is ADA compliant and features a right height elongated bowl. We really like its powerful flushing system using siphon action for improved performance. Additionally, its glazed surface is antimicrobial and prevents the growth of microorganisms, such as mold, mildew, and odor-causing bacteria. However, American Standard Champion 4 is not EPA WaterSense certified. We hope this review was helpful to you. Feel free to browse more high quality toilet reviews here.