Never Flush These 8 Things Down Your Toilet – Toiletable

People are always in doubt about what they can and can’t flush down a toilet, and it’s for a good reason – some things can clog a toilet pretty quickly. If you were also wondering what you can throw down the drain, don’t worry. Today, we will talk about what exactly you may or may not flush down the toilet. 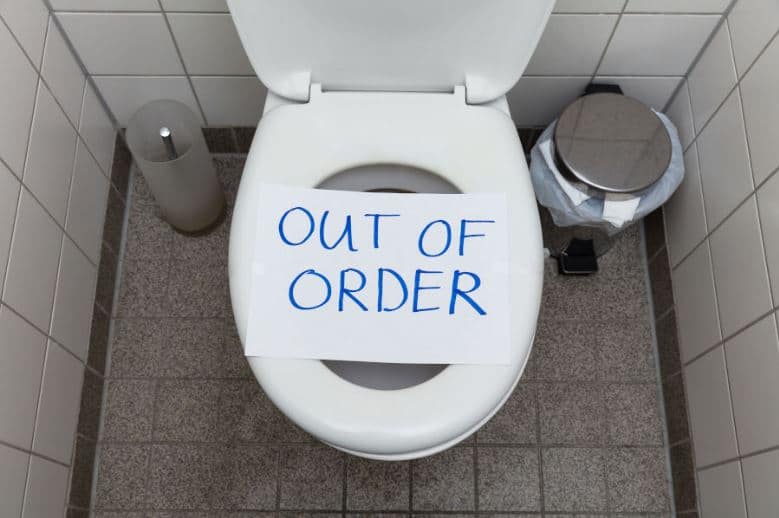 Why Does a Toilet Clog?

First, we need to clarify why toilets get clogged. Five basic reasons include a blocked trapway, a blocked plumbing vent, main sewer line problems, having a low-quality or old toilet, and obviously, flushing non-flushable items in the toilet. A toilet is designed to dispose only of certain items, usually those that quickly dissolve into water. The fact is, no matter how wide the pipe, it can easily get blocked with non-disposable materials. In turn, the water won’t be able to flow properly, which will cause additional problems.

Are These Items Safe to Flush?

Most likely there are some materials that you flush every now and then, unaware that they are non-dissolvable. Below we’ll discuss what is the truth and what is a myth.

Most cat owners believe that cat litter is more eco-friendly than the already-existing alternative. However, that’s not the truth. Modern cat litters are less smelly and more convenient, but still, they can cause problems in your plumbing. Besides, they can even send harmful parasites into water treatment plans that aren’t able to filter them properly.

We all lose a bit of hair on a regular basis and it’s considered completely normal. If you own a dog, you are probably already used to seeing lots of hair in the house, and you might have considered flushing stray hairs down the toilet. Much worse things don’t clog the toilet, so hair seems completely harmless.

However, although it might seem harmless, it’s not a good idea to flush hair down the toilet. Hair is one of the most common things that cause clogs in the plumbing system. Hair easily snags on anything, which is pretty bad for older plumbing systems or pipes that have been repaired and have rough areas. Plus, if the hair is long, it can easily ball up and pick up everything in its way. Additionally, no matter if it’s human or pet hair, it breaks down very slowly.

Even if the wipes are labeled as “flushable,” you should never throw them in a toilet. Most wipes are made of cotton, but some of them may contain plastic resins that prevent them from decomposing. Around half of the sewer systems in the United Kingdom are abused by wipes, and the number is increasing.

Plus, wipes don’t just cause issues with your toilet. When your plumbing system gets clogged, the content from the sewer will come back up through the pipes, or even up your sink, and create a huge financial loss. We strongly advise you to throw baby wipes in the trash bin after use.

If you want to throw some old pills in the toilet, you might want to think again. Unless the pills don a “flushable” or another similar label, you shouldn’t flush them down the toilet. They won’t cause any clogs, but they will definitely affect fishes’ biological behavior in rivers. Some people even chop the pills and mix them with cat litter, which is also not a good idea. Many pharmacies have a medication take-back program where you can take your old pills.

You can also mix the medication with dirt or litter and throw it away in the garbage. The goal is to make it as unusable as possible to prevent others from getting to it and using it in unapproved ways. Also, you might want to scratch your identifying information from the bottle.

Most people don’t know that they shouldn’t flush paper towels in the toilet. Although they might look like toilet paper, they are made from slightly different materials. The fiber they are made from takes much longer to dissolve than toilet paper. After some time, they might cause clogs and blockages in your toilet. The best way to get rid of used paper towels is to simply throw them in the trash bin.

Since tissues are also paper products like toilet paper, you might be wondering if you can flush them. Unlike tissues, toilet paper is specially designed to dissolve quickly in order not to clog your toilet. However, tissues are made to absorb more moisture, which makes them bad for your plumbing system. Even Kleenex tissues are not safe to flush, although they might seem different and more plumbing-friendly than other tissue brands.

Of course, if you flush them once or twice, it won’t become a problem. But if you do it regularly, it will definitely clog your toilet.

#7. Can I Flush Q-Tips and Dental Floss?

Flushing Q-Tips down the toilet is one of the fastest ways to see it clogged. In most cases, those sticks will get stuck crosswise and literally collect everything that comes in the way. Since they are made of plastic, they will take very long to dissolve, and sooner or later, you will have to do some unclogging.

But what about dental floss? It’s so tiny and light that it may seem it could hardly cause any trouble. However, that’s not true. Dental floss can quickly get tangled and catch all the dirt down the pipes. Also, it easily breaks, and instead of one floss, you will have many flosses in your plumbing that catch dirt, debris, hair, and other waste. In no time, you will start to experience problems with your toilet, which would require immediate attention.

Some people buy biodegradable dental floss instead, but it’s also NOT a good thing to throw in your toilet. However, if you throw it into your compost bin, you can both have oral hygiene while being eco-friendly.

What Is the Best Way to Unclog a Toilet if I Don’t Have a Plunger?

If your toilet gets clogged but you don’t have a plunger, don’t worry – you can still unclog it in different ways. For example, you can try pouring hot water down the drain, which will in most cases dissolve the clog.

Will a Toilet Unclog Itself Over Time?

Most things that get clogged in the toilet will dissolve after some time. However, depending on what you threw down the drain, it might take anywhere from a day or two to a couple of weeks. Most people wouldn’t want to wait that long, so it’s best to call a plumber or try to unclog it by yourself right away.

Can Solid Waste Clog the Toilet?

If the waste is too big, it can cause a clog. However, the clog from solid waste is usually temporary. You can either wait for it to dissolve or use a plunger to help move the waste down the pipes.

What to Flush Down the Toilet to Unclog it?

Sometimes, you don’t have to use a plunger or a plumbing snake to unclog the toilet. For example, you can get rid of most clogs using only vinegar and baking soda. Mix them up and pour down the toilet, but be careful since they might create bubbles and splash around the toilet. You can also try using household bleach. Pour two cups, and after a few minutes, add a cup of powdered soap and wait for twenty-five minutes. Then, simply flush the toilet, and the problem should be solved.

When Should I Call a Plumber?

Before calling help, try at least a few methods on your own. Most don’t require any DIY skills, and in the end, you will save a nice sum of money by not calling a plumber. First try the methods that we mentioned, like using baking soda and vinegar, hot water, or household bleach. If nothing helps, try using a plunger or a toilet snake. If the problem still persists, the only solution would be to call a plumber.

Many items that seem flushable are actually not good for your toilet. They won’t do any harm if you throw them down once or twice, but if you do it on a regular basis, you will have problems in the future. Use our guide to better understand what can be flushed and what can’t, and if you do end up with a clog, use our tips to unclog your toilet yourself or call professional help.