Sink vs. Toilet Plungers (You May Need Both) Guide 2022 – Toiletable

When a toilet or sink gets clogged, most people will use any plunger they can find nearby to fix the issue. However, if the plunger isn’t the right one for that scenario, it won’t properly do the job. That’s when people tend to start doubting their DIY skills, even though the issue isn’t them but rather the type of plunger.

In this article, we will clarify which type of plunger is for the toilet and which is for the sink, and explain what sets them apart.

When you take a look at these two plungers, you will notice that the only major difference is in the flange. Basically, the flange is a rubber piece that sits inside the rubber cup of a toilet plunger and comes in various shapes. While they come in different shapes, all flanges have the same function, which is to seal the drain pipe and create a more effective sucking force.

The flange is found specifically on toilet plungers because it prevents the plunger from filling with toilet water. If you’ve ever had to turn a flange inside out after a few thrusts, you were actually using a sink plunger. Sink plungers don’t have a flange, and their design allows them to form a seal on a flat surface, which makes them ideal for sinks but otherwise pretty much useless when it comes to toilets.

As mentioned, sink plungers are not effective for toilets. In most cases, they will just move the water but won’t remove the blockage. Toilet plungers, on the other hand, can also work as sink plungers, but that’s not always a good idea. If you don’t keep your toilet plunger sanitized, it’s not hygienic to use it for removing clogs in your sink. Ultimately, it’s a nice idea to have separate plungers for toilet vs sink use, and it’s even better to buy them in separate colors so they’re not confused with each other.

You have probably used a toilet plunger at some point, but when it comes to sinks and tubs, people mostly tend to use plumbing snakes. However, if nothing helps, it’s time to use the sink plunger. The unclogging process is the same for both sinks and tubs.

First, you should locate the overflow opening, which is the hole near the sink. Covering the overflow opening will help ensure that the plunger forms a proper seal on the drain. Then, place the plunger over the clogged hole and let the water run until it covers the rubber cup. Pump the plunger a few times, then lift it up and check if the water drains. If the water drains slowly, pump a few more times until the water flows as expected. Then, run hot water for a few minutes to flush out any remaining parts of the clog. 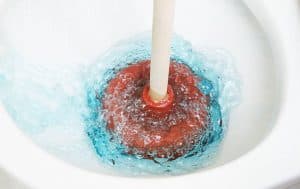 Unclogging the toilet with a plunger is actually easier than you might think. However, before you start, make sure to turn off the toilet’s water supply to prevent any overflow. Then, cover the drain with a plunger, making sure the water covers at least half of the rubber flange. If there isn’t enough water, pour some in, but make sure that the plunger forms a complete seal.

Push the plunger down, then pull it up sharply, making sure to not break the seal. If done properly, this motion will create a vacuum that should eventually remove the clog. Be sure to perform the same action with the plunger at least a few times. Also, if you poured some chemicals down the toilet to also treat the block, make sure to use safety glasses and gloves as the chemicals might splash. Finally, after pushing on the plunger a few times, break the seal and remove the plunger. At this point, flush to check if the toilet is still clogged. If it is, try the same process a few more times. If the plunger ultimately doesn’t help, it’s time to use a plumbing snake or potentially call a plumber.

What is an Accordion Plunger?

Accordion plungers are not as popular as sink and toilet plungers, but they can create a lot of force. However, they’re completely plastic and are a bit difficult to use. The plastic material means the accordion plunger might not fit the toilet as a rubber plunger does. The material can also scratch the toilet, so don’t be rough while using if you do have an accordion plunger.

As you can see, although they look similar, sink and toilet plungers are built differently. Sink plungers won’t work if you try to use them in a toilet, and while a toilet plunger will work for the sink, it’s not hygienic to use one plunger for both purposes. Instead, we strongly recommend you to have separate tools, and even better, buy them in different colors. Then, you should have no problem following the steps from this article to resolve any issues with both your toilets and sinks.