What Are The Different Shower Valve Types, Which One Is The Best?

Shower valve was an invention of an American businessman, Al Moen, who came up with the idea of a single-handed faucet in 1937. His design allowed the bather to mix hot and cold water before using it to prevent heat burns. This idea revolutionized the plumbing system and inspired many advancements in the years after.

Today, a shower valve is a vital component of the shower system in any bathroom, which allows you to moderate the flow and temperature of the water. In this article, we’ll explain the different types of shower valves and help you choose the best one for your bathroom.

There are two main types of shower valves:

A thermostatic shower valve allows the user to control the temperature level inside the shower, and you can adjust it as per your need. It usually works through two mechanical knobs, one that controls the water flow and the other that allows the mixing of cold and hot water. Once you’ve adjusted the temperature knob, it keeps the temperature constant without having to change it every time you take a shower.

Some thermostatic valves also have a unique anti-scald feature that automatically shuts off the valve if the temperature exceeds the provided limit. This feature proves to be highly beneficial for people with sensitive skin, especially children.

A manual shower valve is more simple and inexpensive, but you might need to adjust the water temperature each time you take a shower. It usually has only one knob that controls the water flow, as well as the temperature intensity.

By design, manual valves cannot regulate water temperature in case of pressure change; hence, they might be dangerous in a household with children.

Shower valves have further division based on the types of diverters they use to function. They are given below:

A twin two-way shower valve is similar to the twin one-way valve and also has two knobs, where one controls the water temperature, but the other one works as a diverter. The diverter allows you to switch between two water outlets, such as an overhead shower and a handheld shower. Note that both the water outlets cannot operate at the same time, and the water flow is either entirely on or entirely off.

Triple two-way shower valve has a workaround design to work with two separate showerheads at the same time. It typically has three controls, where one controls the temperature, and the other two control the water flow from each outlet. This valve proves to be handy for an immersing and customizable shower.

The triple three-way shower valve is a part of a luxurious bathing system that has three separate knobs for operation. One knob controls the water temperature, while the second one works as a diverter to switch between two water outlets. The third knob controls any special or extra features such as water jets, body sprays, etc.

What is The Perfect One for My Bathroom?

Now that you’re aware of the different types of shower valves, it might be easier for you to make a shower valve decision for your bathroom. However, the sheer variety of the available products is overwhelming, where each brand claims its product to be the best. So it can be incredibly difficult for you to choose the perfect one out of so many. Hence, we’ll look into some essential factors you need to consider before making a purchase. They are listed below:

Always consider a shower valve with a non-toxic, high-quality material construction that is rust-free and easy to clean to ensure a safe bathing experience. More importantly, make sure the product has no broken or damaged parts that can result in inefficient operation or water wastage. Luckily, modern shower valves have a sealed design that resists leakage and a lifetime finish to stay corrosion-free.

The number of controls:

The number of controls depends upon the type of shower system you have in your bathroom. E.g., a bathroom with two shower heads may require two knob controls, while one with an added jet system might need up to three controls. Furthermore, the complexity of the controls should be easy enough to understand for each user, especially for children.

Most shower valves have a universal design to fit the plumbing system in your house. However, some shower valves may require minor bathroom renovation or might be incompatible with your current shower system. So, always make sure you purchase the compliant product for your bathroom that is easy to install and works like a charm.

Thermostatic valves are costly but are more efficient and suitable for households with smaller children. However cheap, the manual valves can cause burns or irregular water temperatures and are not advised for people with sensitive skin. Hence, make sure to choose the right valve type that suits you and your family’s needs.

Purchasing a shower valve from a renowned brand allows you to claim or reclaim your warranty and often get customer support from the company to resolve your issues. Such brands also provide high-quality products with defined specifications, so it’s easier for you to choose. On the other hand, a low-end or anonymous company might not offer you these benefits, and you could end up with a faulty, cheap product.

You May Also Enjoy 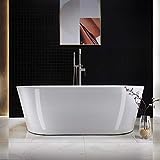 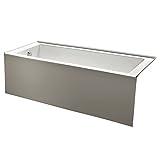 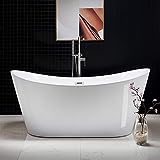 WOODBRIDGE Modern Bathroom Glossy Acrylic Free Standing Bathtub/White, 67" B-0010 Without Faucet
$752.17
Check Price
Toiletable > Recent Content > Tubs-Showers > Accessories > What Are The Different Shower Valve Types, Which One Is The Best?
Scroll Up